It’s been a while since we’ve posted and we’ve got some exciting news – we’re pleased to add the Raspberry Pi 4 to the Entangle family! 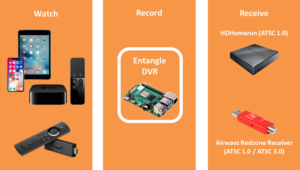 END_OF_DOCUMENT_TOKEN_TO_BE_REPLACED

Those of you who’ve followed us here at in-koherence know that we’ve taken a skeptical eye to using SSDs in DVRs, although things started to turn around a couple years ago. Still, even with improved endurance and falling prices the good old hard drive reigned supreme. While they eventually suffer mechanical failure (usually degradation of the platters) after a time, they tend not to fail just because you’ve written a certain amount of data to them. In regular use the drive will suffer mechanical failure long before then. This isn’t the case with SSDs. The NAND flash cells can only be written a given number of times, and although most employ sophisticated algorithms to optimize the wear of those flash cells, you need to pay attention to a drive’s endurance rating.

But something interesting has happened in the storage market – high endurance and somewhat affordable SSDs have started to appear – thanks to the chia cryptocurrency of all things. And a reasonably-priced high-endurance SSD is just what’s needed for DVRs.

END_OF_DOCUMENT_TOKEN_TO_BE_REPLACED

All that could change with ATSC 3.0 (aka NextGen TV). END_OF_DOCUMENT_TOKEN_TO_BE_REPLACED

MOUNTAIN VIEW, California (AB)  Koherence Labs, the R&D arm of consumer electronics consulting firm Koherence, LLC,  is rumored to have made a breakthrough in content recording. Dubbed “InfiniDVR,” the new technology allows  an effectively unlimited recording capacity and permits viewing of all shows that have ever been or will be broadcast.