Another CES has come and gone with its usual fill of dazzling tech, good dining, and blistered feet. And while I’m sure there was a 500″ 5G-connected 16k smart OLED TV with AI-imbued visual enhancements and a deep learning content recommendation engine, ATSC 3.0 was notably absent from the show floor. This isn’t too much of a surprise as the standard was completed just a year ago and it takes a bit of time for products to arrive and broadcasters (and their vendors) to gear up. While no products were on the show floor there was still plenty of activity going on in the background. As in previous years, Sinclair had its ATSC 3.0 test broadcast running from Black Mountain. CES 2020 will no doubt be an exciting show for 3.0.

In the meantime, the annual trip to CES in Las Vegas provided an excuse to peruse the ATSC 3.0 airwaves and capture some bitstreams. I’d been working with 3.0 from a specification standpoint for much of 2018 with an eye to retrofitting Project Entangle. And with an Airwavz TV RedZone Receiver in hand it was time to start tearing into real broadcasts.

With its bright red enclosure the Airwavz RedZone Receiver is hard to miss and, despite the outwards appearance of a USB flash drive, packs a hybrid ATSC 1.0/3.0 tuner/demodulator. The RedZone Receiver (RZR) is geared towards very early adaptors of ATSC 3.0 – those who are working to develop tools and software stacks to support eventual products. It comes with an SDK which allows developers to control the demodulator and capture ALP-level streams. Also available is a higher-level API which uses HTTP/JSON requests to control the tuner/demodulator, and which will also turn the ALP stream into UDP and multicast it over your network.

If you think you’re going to plug the RedZone Receiver into your laptop’s USB port and start watching ATSC 3.0 broadcasts then you’re in for a bit of a disappointment. See, you’ll have to write the software to extract the ROUTE/DASH or MMT broadcast from the IP multicast, and then write a player to handle those streams. But for the target audience of developers the RZR’s SDK provides just the right level of functionality.

The RedZone Receiver isn’t exactly cheap at $895. But if you’re a developer looking to start working with ATSC 3.0 it’s worth every penny (and happens to be just about the only game in town.)

Chomping at the bit to put the RedZone Receiver through its paces, I added a last minute diversion on the route to CES – Santa Barbara. News Gazette Company (NPG) lit up its KSBB-CD ATSC 3.0 transmitter in Santa Barbara a couple months earlier, in October of 2018. The broadcast is ROUTE/DASH-based and hosts two 1080p channels on a single PLP.

I’ll have to say that this is the first time I looked for a place to stay based on its proximity to a broadcast tower and ended up  at The Presidio. It’s a motel with old bones that’s been nicely remodeled, and about a mile and a quarter from KSBB-CD’s transmitter. While checking in I asked the manager about a room facing the transmitter, which elicited a questioning stare. Probably because he had no idea where the transmitter was, and why in the world would anyone want that? A short discussion of ATSC 3.0 I think left him only slightly enlightened and probably desperately hoping I just really, really liked TV and wouldn’t burn the place down.

Not wanting to waste any time, as soon as I got into the room I unpacked my laptop and the RedZone Receiver and started a channel scan. An ATSC 3.0 signal was found at 491 MHz (RF channel 17), right where it was expected. The reception from The Presidio was good with just the stick antenna that came with the RedZone Receiver. Within a couple hours, and after debugging some tools I’d written, I was able to capture and view one of the channels. Which was, admittedly, a not all-that exciting news segment. In addition the audio decoded to a staticy chirping. It’s still on my to-do list to take a look at that.  (To put this in perspective, the very first ATSC 1.0 broadcast we watched on the first TiVo HD frankenbox prototype was an exhilarating spiral ham commercial. I can’t remember if there was audio, but the box apparently was allergic to ham and crashed within a few seconds. Still, it hard worked!…a feeling I relived while watching that first ATSC 3.0 clip pulled in by the RedZone Receiver.)

By the wee hours of Monday morning I had some good captures at the ALP and UDP levels. The RedZone Receiver was performing admirably in pulling in KSBB-CD.

Even being within a mile of the transmitter, reception was very good but not perfect. Every so often the signal would glitch. I don’t have enough experience with 3.0 to hazard a guess as to what was impairing it, and hadn’t brought along a spectrum analyzer. But I imagine that although ATSC 3.0’s OFDM modulation is more tolerant of multipath, it’s not completely immune. And being so close to downtown, dynamic multipath sources were in good supply. It could also be the maturity of the technology. We’ve seen tremendous strides in ATSC 1.0 8VSB demodulators from the first generation parts in the late 90’s and early 2000’s to the current crop of seventh and eighth generation demodulators. Methods of tackling multipath, which 8VSB is particularly susceptible to, and other impairments have been developed to a level where some argue that today OFDM (which ATSC 3.0 employs) has no technical advantage over 8VSB. No doubt we’ll see continual advances in ATSC 3.0 demodulators in the generations to come and consumers will increasingly be able to get by with small indoor antennas.

On Monday it was off to Las Vegas where I had booked a room at the Stratosphere. The Sinclair CES broadcast comes from Black Mountain, which is to the southeast of the Strip. On checking in I asked for a south-facing room, preferably one on an upper floor, and explained that I wanted to be facing Black Mountain. I suppose hotel staff get all sorts of weird requests, since the gentleman checking me in didn’t bat an eye. After several rounds of back-and-forth between him and other staff members, he informed me that there weren’t any south facing rooms available but he could get me up to the 20th floor. Oh well. I figured there’s always Plan B – driving over to Fry’s Electronics and hanging out with my gear in their parking lot.

When I got to my room I fired up my laptop and the RedZone Receiver and started a scan of the airwaves. A couple minutes later – lo and behold an ATSC 3.0 broadcast had been spotted at 587 MHZ (RF channel 33). Further characterization showed a weak signal coming in – mind you this was still with the stick antenna which came with the RZR. By moving the antenna around on the desk (it apparently had an intense dislike of the knock-off Keurig), I was able to get a rather weak but more-or-less stable signal. A half hour later, a capture of the signal revealed two ROUTE/DASH 1080p subchannels on a single PLP. One subchannel had a 3-minute OneMedia demo loop with burned-in timecode. And the second had…a different 3-minute OneMedia demo loop also with complimentary timecode. 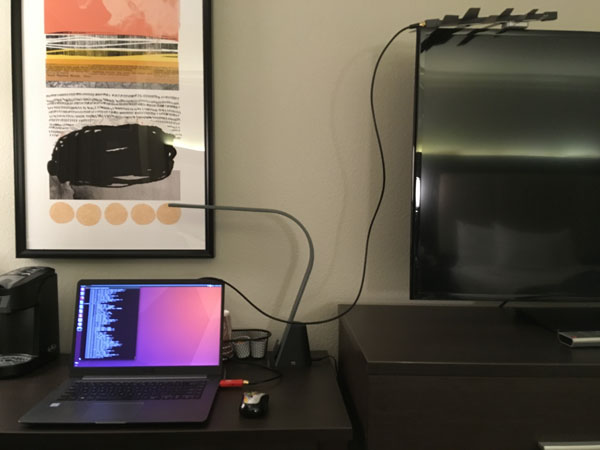 The signal was surprisingly stable given that it was being picked up by half a rabbit ear, though it would glitch every few minutes. I eventually hooked it up to a venerable Zenith Silver Sensor I’d brought along, which reduced the glitching to a couple times an hour. The optimal positioning of the Silver Sensor had it aimed towards the hotel room door, which made some sense as that was roughly SSW. The broadcast tower was southeast, however the length of the wing of the Stratosphere I was in also lay in that direction.

Those of you with a technical bent may want to take a look at the screenshot showing some metrics of the signal. Some key statistics are RSSI -56 dBm and SNR 12dB yielding a signal quality of 90%. 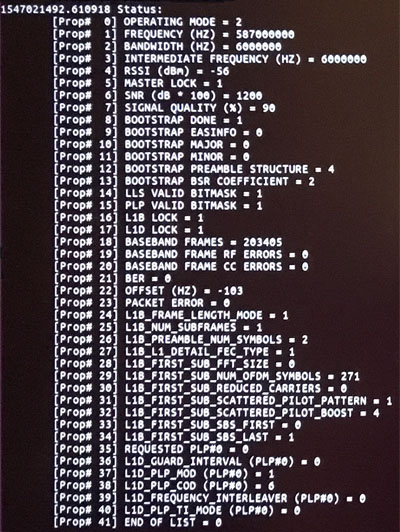 Some Thoughts on the current state of ATSC 3.0

There’s been a lot of dismay among the ATSC 3.0 enthusiasts about the absence of 3.0 devices at CES. I’d like to suggest that 2019 isn’t the year for the consumer. It’s the year for broadcasters and their vendors to get their act in order. The ATSC 3.0 specification set may have been approved in full in January 2018, however in many respects that just marked the end of one journey and the beginning of another.

The journey that concluded in 2018 involved experimentation, trials, and the inevitable jockeying which goes on with various camps vying to influence a standard. The road ahead has broadcast equipment vendors getting their devices to adhere to that standard and broadcasters planning production rollout. As an example, AC-4 broadcast encoder implementations are just starting to appear (most of the current 3.0 broadcasts in the US are in fact using legacy codecs due to a lack of AC-4 encoders.) And there are a great many knobs for broadcasters to experiment with in optimizing the broadcast for their market. Nothing would be more frustrating to a consumer than to bring home a brand-new ATSC 3.0-enabled receiver, plug it in, and fail to watch programming because the broadcast isn’t quite spec-compliant, or because the broadcaster didn’t do a thorough job of evaluating which coding/modulation is best suited for its viewers.

While the broadcasters and their vendors are getting their houses in order, consumer devices also need to be developed. While LG’s first-generation tuner/demodulator has been around for a while and is used in Korean products, we’re just starting to see devices from other vendors such as Saankhya Labs. These need to be built into receivers which also run a rather non-trivial software stack implementing all of the variations which can occur in 3.0 broadcasts. (Yes, devices do exist in Korea today. However there seems to be a bit of a questions as to how fully the receiver software implements the full ATSC 3.0 specification – the Korean TV market is somewhat smaller and more controlled than the US market, so has likely constrained itself to a usable subset of the full specification. Their experience will hopefully ameliorate ATSC 3.0’s birthing pains in the US however.)

Two years from spec ratification to consumer products isn’t really a long time given that ATSC 3.0 is a new broadcast standard rather than an evolution of an existing one. In fact by some measures it could be considered aggressive. But that hazy and ever so finnicky crystal ball suggests CES 2020 might be a good time to look for ATSC 3.0 product announcements

If you've found this site informative, or maybe just entertaining, click below and head over to Amazon. We'll get a small commission on your purchases.