I was recently reminded that summer’s come and gone with nary a peep out of in-koherence. So just what’s been going on? Well in addition to various feature enhancements to Project Entangle, the in-koherent project SFBayATSC was rolled out in May.

SFBayATSC is actually a follow-on to a similar OTA ATSC monitoring site which was run by AVSForum member toast0. Earlier in the year toast0 gave notice that he’d be moving and that his monitoring system would be shutting down in May. The signal reception data he collected was quite useful to both viewers and broadcasters in the Bay Area, so that got us thinking…just maybe Project Entangle could fill the gap. So the signal analysis, already a part of Entangle, was beefed up, a cloud infrastructure was built, and SFBayATSC was born.

SFBayATSC is dedicated to monitoring OTA ATSC broadcasts in (as its name suggests) the San Francisco Bay Area. The data collection and broadcast analysis side of things is derived from Project Entangle. Many of these features were internal diagnostic functions – when you see glitches in your recordings, its really nice to know that there was a signal reception problem (as opposed to, say, a bug in your software.)

The Project Entangle boxes in monitor mode (we’ve been too busy to think of a name for these) record the full MPTS (as opposed to the demultiplexed SPTS that are normally recorded),  analyze the PSIP and elementary streams, and periodically interrogate the tuners for what information they can provide about the RF signal. These get pushed to a cloud server which then presents the data as various charts and reports. You can read more about how the monitor-mode boxes work at SFBayATSC’s About page.

The following program and bitrate chart of RF 30 (the SF Bay Area PBS stations) illustrates the bit allocation as well as how the stat mux adapts the bitrates of the two HD channels. 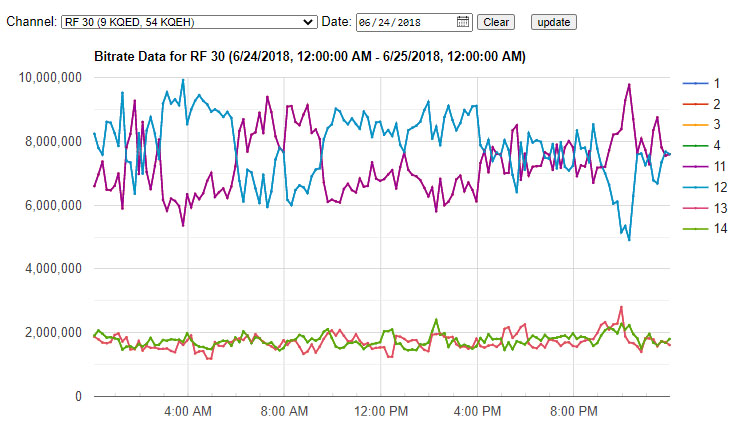 SFBayATSC has also documented some interesting events over the past few months. Here are a couple recent examples.

First is KRCB’s acquisition of KCSM-TV which took effect on July 31, 2018. In addition to changing KCSM’s call sign to KPJK, the encoding was apparently changed from CBR to VBR. A couple subchannels made their appearance as well, apparently at the expense of the primary HD channel 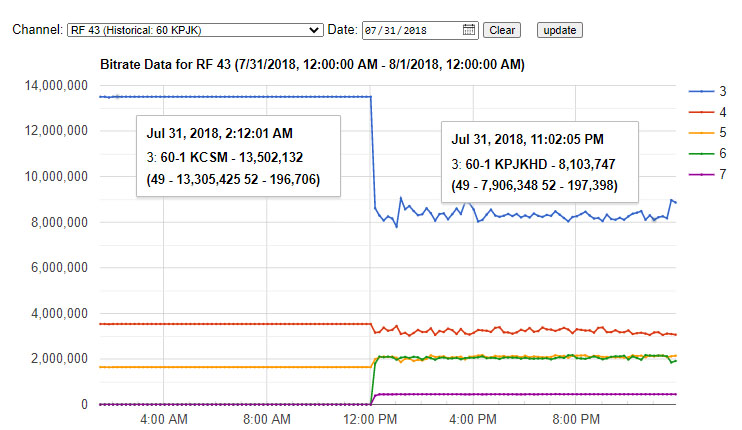 Later in the month on 8/20 at around 4 PM KPJK went off air . It eventually returned to service at about noon on 8/21. The bitrate charts show all subchannel falling off. 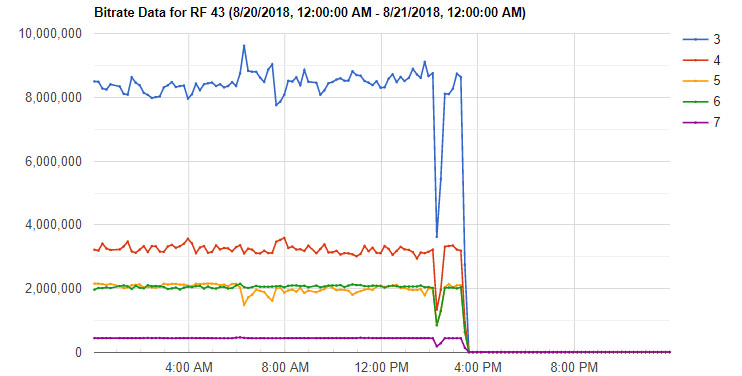 The tuner & demodulator chart provides a clue as to why. The signal strength, signal quality, and symbol quality all remain at acceptable levels so the RF appears fine. However the utilization (darker green line highlighted in the chart) falls to zero. Basically what has happened is that elementary streams from the subchannels are no longer being multiplexed and the MPTS consists almost exclusively of NULL packets (and perhaps a bit of PSIP).

We hope that SF Bay Area OTA enthusiasts and broadcasters find SFBayATSC useful. Drop us a note if you have suggestions for improving the service.