One of the goals of Project Entangle is to receive The Perfect Broadcast – a transport stream with no bits missing or in error. As anyone using OTA ATSC (and since you’re reading this you’re probably one of them) knows, this can be a challenging endeavor. Signals can be too weak, and ironically too strong. Multipath can turn an otherwise strong  signal error-prone. Dynamic multipath is even harder to deal with as the demodulator needs to adapt to the changing properties of the signal.

But hard doesn’t mean impossible. One of the methods for obtaining The Perfect Broadcast that Project Entangle has been investigating is diversity. Essentially, diversity involves receiving two or more versions of a broadcast in different ways. The various versions are then combined to yield a signal that’s better than any of the individually received ones.

Before we talk more about diversity, one thing we should be clear on is that we’re not talking about signal combining. Signal combing is commonly used when you need to receive signals from different directions. For example, here in the San Francisco Bay Area the main transmitters are located atop Sutro Tower in San Francisco. However, particularly for those in the South Bay, some channels are better received from transmitters located on Mt. Allison and Monument Peak in the hills above Fremont.

If you have an omnidirectional antenna, you might be able to receive all of these. However omnidirectional antennas tend to be prone to multipath, which is a major problem in the SF Bay Area. So using two directional antennas generally yields better results. The problem with using two antennas, of course, is that you end up with two RF cables. Aside from all the extra wiring associated with running the two signals around your house, it’s unlikely that your TV or set-top boxes will accept two RF inputs. So you’d really like to get down to one RF cable.

In order to merge the signals from the two antennas you can’t just splice the cables together. Even though an antenna is pointed away from a tower, it will pick up some of its signal (along with some general noise). If you were to splice the two RF cables, you’d be adding that weakened and in all likelihood out of phase signal to the good signal from the antenna that is pointed towards the tower. Instead, you need to filter the signal so that each antenna supplies only the channels it’s intended to receive. So for the antenna pointed at Sutro Tower you would filter out all the signals from Fremont, and vice-versa. Then the filtered signal from each can be fed into an RF combiner. 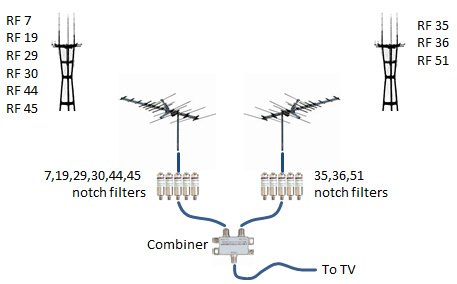 With RF signal combining you eventually end up with one RF cable coming out of the combiner. This is a particularly good solution when all of your favorite channels can be received well, but you need multiple antennas pointed in different directions.

With RF signal combining, you end up with one version of a signal for a particular channel. In contrast, diversity relies on processing more than one version of a received signal.  The idea is that each received signal is different in some way, and when one is impaired one of the others may not be. By switching among the various versions, a receiver can patch together a hybrid signal that is better than any of the individual ones. So diversity can help both when you have a good signal – there will always be the occasional transient impairment – but shines when applied to signals that are more difficult to receive.

If you use 802.11 Wi-Fi, then there’s a good chance you’re already reaping the benefits of diversity. Wikipedia has a good description of 802.11n’s antenna diversity:

…multiple antennas offer a receiver several observations of the same signal. Each antenna will experience a different interference environment. Thus, if one antenna is experiencing a deep fade, it is likely that another has a sufficient signal.

Utilizing diversity to improve your TV experience is particularly useful if the impairments are dynamic. For example, you may be affected by reflected signals from passing cars or planes. Wind blowing through the trees may scatter the signal, and the occasional roof-wandering cat may cause its own set of problems. As long as you can receive one signal that is immune to the impairment, then the hybrid signal will be unimpaired.

While we’ve so far talked about having one version of the signal that’s unimpaired, diversity can also be used to recover a signal when all of the signals are impaired – as long as they’re impaired in different ways. In this case the receiver needs to employ more sophisticated algorithms to recover the signal. For example, it could use properties it obtains from one or more signals as hints about how to interpret another signal.

For a concrete example of antenna diversity’s effectiveness, we can consider the situation with KKPX-DT here at Koherence HQ. We have three attic mounted antennas, and in late spring/early summer, the “prime” antenna for receiving KKPX-DT slowly migrates from one antenna to another antenna. Both antennas are oriented towards the KKPX-DT transmitter. However they are of different models, physically spaced about six feet apart, and their orientations are offset by a few degrees.

The difference in signal reception is pronounced. Over the space of an hour or so, the signal from one antenna goes from pristine to exceptionally bad (near constant blocking). Over that same period, the signal at the other antenna goes from marginal (blocking every couple minutes) to near pristine.  When we first considered this condition we thought that we might get a good hybrid signal at the beginning and end of the transition period. But since both antennas were receiving a marginally watchable signal in the middle we didn’t hold out much hope of improving that portion. To our surprise, the hybrid signal was near error-free throughout the entire transition! In the middle of the transition the hybrid was created by constantly switching between the two signals. While both were significantly impaired, they tended to be impaired at different times.

Diversity can be achieved in a number of ways – even something as simple as placing a second antenna a few feet away creates diversity. Here at Koherence we make use of:

One can apply diversity at any point where you can figure out which signal is better. In theory this could be done very early in the demodulation process, for example by characterizing the eye pattern for each RF input. This has the advantage of minimizing redundant hardware – and demodulators can be rather expensive in terms of silicon space and power. The switch point could also be done within the demodulator right after the Reed-Solomon coding step. Reed-Solomon coding lets the demodulator know if a particular packet has errors or not. So it’s an ideal point to check if packets from other inputs don’t have errors.

A downside to analyzing the transport streams at this stage is that we lose signal timing. Although the MPEG transport stream carries compressed audio and video, there are a surprising number of identical transport packets that can occur in a short period. This needs to be accounted for when aligning the transport streams from multiple sources to avoid false alignments – something made all the more difficult since one or more of the streams may be damaged.

So Just How Well Does it Work?

To give you an idea of how well diversity can aid in restoring broadcasts, let’s look at a broadcast from KNTV-DT during an episode of severe weather. The KNTV-DT transmitter is located atop San Bruno Mountain, which from Koherence’s location is five degrees east of San Francisco’s Sutro Tower. Two versions of the broadcast were acquired: one using a CM4228-HD antenna oriented towards Sutro Tower (the “main” antenna), and a second using a CM4224-HD antenna oriented a few degrees off of Sutro Tower (the “alternate” antenna). A number of properties were used to align the transport streams obtained from each antenna. The streams were then segmented into slices of approximately 40 milliseconds.  A quality metric was applied to each set of corresponding segments, and the “best” segment from each set was used to assemble a hybrid transport stream.

The image below visually depicts the quality of three transport streams corresponding to the KNTV-DT broadcast. Each line represents ten seconds of transport stream, with its color indicating the number of errored or missing packets in those ten seconds. While there isn’t a strict relationship between the number of missing or errored packets – particularly over a ten second period – yellow tends to indicate that noticeable glitching occurs, but the broadcast is in general watchable. As the color moves towards the orange and red side of the scale glitching becomes excessive to the point that the broadcast is unwatchable. Shades of green represent slight errors that are likely handled by error concealment, or result in slight noise that may often go unnoticed.

This example employed antenna diversity with two different models of antennas. It’s likely that even better results could have been obtained by using additional forms of diversity.