I’ve been in Las Vegas this week for the Amazon re:Invent conference. While there are enough sessions, receptions, and parties to keep you occupied day and night, I just couldn’t pass up a chance to check out the Las Vegas OTA airwaves. The Vdara staff was a bit mystified by my request for the highest south-facing room I could get, but very accommodating. So here I am on the 49th floor with good line-of-sight to the major towers (and a view of the desert instead of the Bellagio fountains, which apparently most people ask for.)

I had packed up a full Entangle development setup, including my trusty Silver Sensor antenna (aka the Zenith ZHDTV1). What I failed to do while busily packing was to check the RF frequencies of the Las Vegas broadcasts. As it turns out there are a few major channels in the VHF bands, including one on channel 2. Sadly the Silver Sensor is a UHF-only antenna.

This brings up an interesting point regarding the current state of OTA antennas: many of them, particularly the compact ones, are UHF-only. Even the ones that claim to be both UHF and VHF don’t handle VHF very well. At best they’ll pull in VHF-Hi. But can you make do with a UHF-only setup?

Do You Need VHF?

The question can be a bit vexing and non-intuitive to the casual OTAer. To begin with, there are actually two VHF bands used for OTA broadcasts:

There’s quite a gap  between VHF-Lo and VHF-Hi, and between VHF-Hi and UHF. Ideally an antenna would be tuned for all three of these bands, but designing an antenna that spans the range from 54 MHz all the way up to 890 MHz can be quite a challenge. In addition the desire for compact antennas with reasonable aesthetics that can be used indoors often leads to compromises.

To compound this, the station you may know and love as “Channel 2” isn’t really broadcasting on VHF-Lo channel 2. So a bit of detective work is needed to figure out whether your favorite stations are VHF or UHF. Understanding how we got into this convoluted state requires a bit of history.

As part of the digital transition, there was a time when analog and digital were simulcast. This gave people time to switch from their TV with analog tuners to TVs with digital tuners. (Or buy a set-top box…though the transition period was long enough that many simply upgraded their TVs. The rise of flat panel TVs, which happened to coincide with the digital transition,  helped in no small way – who wouldn’t want a plasma or LCD TV instead of a CRT?)

Since the VHF bands tended to be occupied by the analog broadcasts, their digital counterparts usually ended up on the UHF frequencies. But the digital RF frequency was hidden from users through the magic of virtual channel numbers. So if you used to tune to channel 2 to get the analog broadcast you’d tune to 2-1 to get its digital equivalent. A great and fortunate thing since many people strongly associate a station with its (analog) channel number. There are many times when I’m talking to someone about a show and they ask which channel it’s on. If I mention the station call sign or network affiliate I often get a blank stare. If I say “channel 7” then recognition dawns.

Of course eventually the analog stations went away in 2009, which left only the digital stations. While new stations have emerged in VHF and a few have moved from UHF back to VHF, for the most part digital stations tended to stay where they were, i.e. on their UHF channel.

With digital television you started to see “optimized for digital” antennas. That’s appears to be marketing speak for, “Doesn’t receive VHF.” Yes – these are often UHF-only antennas. Digital television is broadcast on the same frequencies that analog television was. Analog channel 2 occupied the 6 MHz band from 54 – 60 MHz. And a digital channel that broadcasts on RF channel 2 also uses 54 – 60 MHz. There’s nothing in an antenna that makes it receive an 8-VSB (digital) broadcast better than the old NTSC analog broadcast.

This isn’t to say that one couldn’t create an antenna that helps digital television. One of the problems with TV is multipath. In the analog days this would appear as ghosting. Basically your antenna is receiving multiple instances of the broadcast. Usually the stronger one is the main path from the broadcast tower to your antenna. The weaker one is a reflection, which could come from buildings, terrain, or atmospheric effects. The reflection takes a little longer to get to you, and that delay is enough to cause the ghost.

Ghosting also occurs for digital signals, which can cause a bit of heartache for the demodulator that’s trying to turn the broadcast signals back into 1s and 0s. So an antenna that reduced multipath interference (ghosting) would be a great thing. Sadly that’s not what an “optimized for digital” antenna does, and the solution for digital is the same as for analog. Multipath can be reduced by using a more directional antenna that doesn’t pick up the reflected signals. (You could also remove the offending building or terrain that causing the reflection. But its usually easier to get a more directional antenna.)

There’s another part of “optimized for digital” which is more benign: not being optimized for the upper UHF frequencies. This is benign since the FCC has slowly been taking upper UHF spectrum away from television broadcasts and reallocating it to other purposes. Those of you with a few grey hairs may remember when analog TV channels spanned 2-83.  In 1986 channels 70-83 were repurposed. So those of you with somewhat less grey hair may remember the range as 2-69. But in 2016 channels 52-69 were also chopped form the TV block to make way for additional cell spectrum.

In the very near future channels 38-51 will also be reallocated to cellular data, leaving broadcast TV with 2-36. (Channel 37 is reserved for radio astronomy). Going from 2-51 to 2-36 means quite a few stations will need to shuffle around, and this change is called a “repack”. It’ll occur in ten phases spanning September 2018 to July 2020. During this time a number of stations (particularly those currently broadcasting on channels 38-51, but others also) will be switching to new RF frequencies. Their virtual channel numbers will remain the same, and if you have a DVR that gets its broadcast information from a program guide service then you may not notice anything. Those of you who rely on a converter box or your TV’s built-in tuner may need to rescan the airwaves so your converter or TV can figure out which RF channel stations landed on.

A Renewed Need For VHF Antennas

As the UHF channels have been winnowed, guess where displaced stations have been going? While some end up on UHF frequencies, some also end up in the VHF range.

When the FCC proposed the spectrum repack, it noted, “There are substantially more unoccupied Low-VHF channels than High-VHF channels. As a result, in nearly all markets, a station could move to a Low-VHF channel without the need to reassign any channels in that band. Conversely, there are relatively few markets where a station could move to High-VHF channels unless other stations vacate that band or are repacked within the band. In at least some scenarios, therefore, we may need to pay two stations in connection with a UHF-to-High-VHF move: a High-VHF station to vacate its channel, and UHF licensee to move to High-VHF. A smaller discount, i.e., a higher opening price, for the Low-VHF option would signal the greater value of this option to the auction.”

So even if you don’t think you need a VHF antenna today, take a look at the “repack” frequency assignments and you may be surprised to find that in a short time you’ll need a VHF antenna to get major networks. The table below show how some of the stations in the SF Bay Area are affected by the repack.

At present it appears that no one is moving to VHF-Lo, and today ABC (KGO 7)  and NBC (KNTV RF 12) are already in the VHF Hi band. So SF Bay Area OTAers appear to be fortunate.

For those of you, like me, who only need UHF and VHF-High, I strongly recommend the ChannelMaster CM4228HD. While it’s primarily a UHF antenna, it’s one of the few that does a rather good job of pulling in VHF-High as well. This apparently is due to the long elements in the reflector which spans the entire width of the antenna (longer elements are required for VHF frequencies). Compare this to the DB8e, where the reflector spans with width of the bow tie (half the width of the antenna). It doesn’t handle VHF-High at all. There’s a good post comparing the Antennas Direct C5 VHF antenna to some bowtie antennas at antennahacks.com.

Meanwhile Back in Las Vegas…

So there I was sitting there with the Silver Sensor and not receiving channel 2, 7, and 9. Sigh. Well fortunately there’s a Fry’s Electronics a couple miles away. While they didn’t exactly have a great selection of antennas, I picked up an RCA ANT111Z. Basically rabbit ears. I swapped the ANT111Z in place of the Silver Sensor and 9 came in well. 7 was a bit spotty. But the HDHomerun Quatro couldn’t lock onto 2 at all.

I finally broke down and surfed over to Amazon.com where I ordered a Winegard HD7000R. This is a Yagi-type antenna with the longish elements required to receive VHF-Lo. When fully assembled it was about eight feet wide. Not exactly what you expect to have in your typical hotel room. But you’ve got to do what you’ve got to do (and Star Trek was on channel 2!) 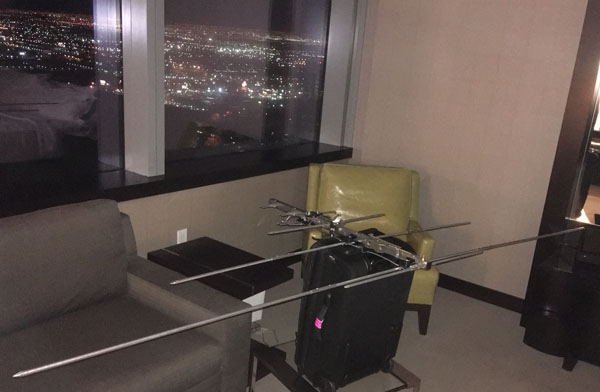 The HD7000R pulled in 7 and 9 very well. But alas, still no 2. I’m not exactly sure why. tvfool suggests that this should be the strongest channel I receive. And it originates at the same place as 9. It could be that the HDHomerun Quatro just has issues with VHF-Lo, or perhaps the signal was too strong and overloaded the Quatro (there have been some reports suggesting this can happen even where the previous-generation HDHR4 didn’t have any problems). I’ll need to bring more gear with me next month at CES (and hope that the staff at Circus Circus is as accommodating as Vdara’s in getting me into a room with great OTA TV reception.)