You’ve no doubt noticed the M&M’s theme sprinkled throughout this site, and on this auspicious day we bring you a little-known use for M&M’s Candies. Happy Easter…and whatever other significance this day may hold!

Many metrics have been used to track the progress of projects and determine if they are on schedule. Yet despite careful attention in selecting and tracking metrics, schedules often remain unpredictable. Project tracking remains as much an art as a science.

In this paper we present a novel method for assessing milestone readiness: the rate of M&M’s consumed by project engineers.

Data was collected from 2000 – 2003 at a consumer electronics products corporation (hereafter referred to as Company M). Company M’s projects were often complex, involving multiple teams and organizations within the company, vendors, contract manufacturers, and development and brand partners. Coordination and tracking was non-trivial and Company M’s management team utilized a number of metrics to track product development. However despite these efforts missed schedules were not uncommon. It was found, however, that a single metric – M&M’s consumption – predicted milestone readiness with greater accuracy than existing metrics and methodologies.

In order to measure the amount of M&M’s consumed, nine M&M’s dispensers were placed in a hallway adjacent to the engineers’ offices. (Two Skittles Candies dispensers were added later in the study. The effects of Skittles Candies will be assessed in a follow-up paper.) Each dispenser contained a different flavor of M&M’s Candies. The dispensers were refilled throughout the day, and the amount (in ounces) of M&M’s refilled was logged. Care was taken to minimize underflow conditions in the dispensers. Yield loss (i.e. the number of M&M’s dispenser errors resulting in candies on the floor) was not recorded but appeared to be proportionate among all flavors and colors.

The graph below charts the ounces of M&M’s consumed on a daily basis in 2002, smoothed using a five day moving average. Significant milestones for projects P and T are also shown. The milestone dates are the actual dates on which the milestones were met, including any schedule slippage.

It can be observed that milestones correlate well with a spike in M&M’s consumption a few days before the milestone date, although not all spikes are related to milestones. The late November/early December spike in particular likely resulted from Company M suspending engineering dinners during the Thanksgiving week. 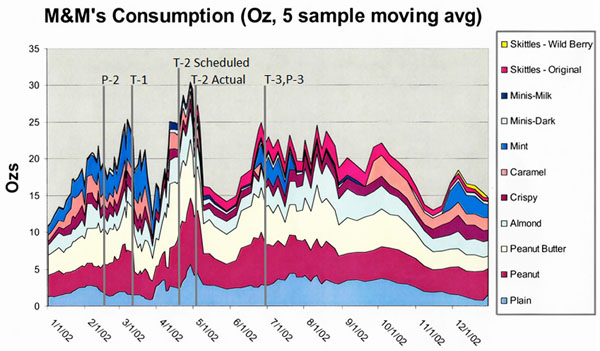 The correlation between spikes in M&M’s consumption and milestone completion stirred much interest but remains unexplained. Theories put forth include:

Further research is required to better understand the relationship between M&M’s consumption and milestone attainment.

While it is unclear whether monitoring the amount of dried guava consumed would have the same predictive ability as M&M’s, a warning can be taken from post-study activity at Company M. After the study period, various project managers elected to maintain the M&M’s supply. A small group of engineers advocated supplementing the M&M’s dispensers with “healthy snack” dispensers. This movement correlated with a period in Company M’s history associated with large schedule slips, frequent changes in direction, and high employee turnover. Restoration of a steady M&M’s supply and removal of the healthy snacks correlated with a reduction in the turmoil. Removal of the M&M’s supply a few years later was followed by the sale of Company M in the next year. While it is difficult to establish any causal relationship between the availability of M&M’s and the general state of Company M, once M&M’s are introduced, the researchers recommend extreme care in reducing or withdrawing them.

The researchers believe that a close working relationship with all project contributors, frequent and honest discussions of progress, and contingency planning are irreplaceable components of successful project planning and execution. However, when looking for statistical metrics as a measure of milestone readiness, the researchers recommend supplementing traditional metrics with measurements of M&M’s consumption.